I’m delighted to announce that the Savage Realms project I have been working on is now going live on Kickstarter. My latest book, The Tavern and On Gallows Hill is joined by two others, penned by Pat ONeil, and David Lowrie of Blackdog Gamebooks. It’s a chance to back three amazing gamebook productions in one go, in a huge triple whammy style. Best of all, whatever level you back at, it’s already funded in less than 12 hours! Congratulations to TroyAnthony Schermer. Here is the link to view this incredible project. https://www.kickstarter.com/projects/malivor/three-new-savage-realms-gamebooks-by-three-guest-authors?ref=project_facebook

Well, I’ve gone and done something rather naughty but also quite satisfying. Behave not that! But as you know, I’m a huge fan of Oliver McNeil’s The Storymaster’s Tales RPG. Players are usually represented by little glass counters, and although Ironrat Mini’s started a line in making miniatures for the different classes, this ceased due to lockdown or brexit or Katie Hopkins or other frightful things. Last night, I browsed eBay and discovered Reaper Miniatures did models of all the 16 classes I needed for a complete set. For generic effect I’ve even purchased the three covered by Ironrat.

My royalties for Literally Immersive Gamebooks have paid for these, I think it’s a job well done. Some of the detail is lovely.

Hey hey! Today I endeavour to finish off the second rewrite of The Druids Of Pneuma. What a nightmare last hundred refs it has been. With plot holes and cross links galore having to have been ironed out, it isn’t any wonder Puffin rebuked 19 year old gamebook writers. Anyway, I think I have come up with a lovely story, or peril and woe, action and adventure, monsters and magic.

Upon completion it shall be shown to three trustees for preliminary perusal, and the wonderful Mike Tenebrae will be briefed on internal illustrations. I have come up with a plan for limited Kickstarter rewards, which people will be able to get a special edition hardback or paperback as well as other goodies. Whether or not that funds, the book will be available on Amazon shortly after the Kickstarter ends. I’m guessing it’ll be a couple of pounds more than the first two Literally Immersive Gamebooks as its over twice as long at 410 references.

Of all the book projects I am ever likely to do, this is probably the most personal to me, and a product of my 19 year old self and 44 year old self combined. There’s that number again! It will also contain a couple of Easter eggs here and there. A 25 year old work is about to come alive. And with a cover by Malcolm Barter, binding me to the Fighting Fantasy series I love and grew up with. This is a dream come true. I’ll be at the Fighting Fantasy Beero tonight, if you cannot make it I wish you all a merry Yuletide break and happy New Year.

Oliver McNeil, creator of The Storymaster’s Tales, invited myself and other gaming fan Helen Donovan, to take part in a live cam session of his latest game named Hotel Lovecraft. Thankfully my inferior internet allowed me to stay the duration, and what an incredible time we had.

The game differs tremendously from previous successes, Weirding Woods and Dracodeep Dungeon. While it is still card/book/dice based, the setup differs in that you are not building a map like in the aforementioned, but playing 6 levels (floors) of a creepy hotel based heavily with a feel of the titular name’s works. The chilling atmosphere when you explore each room is started with an accompanying soundscape and narration at the start of each scenario as usual. This works to great effect, creating a real sense of intensity and dread like in such games as the Room app series. The intensity grows tenfold as you get nearer the end of the game, say, the final two floors, where the end is in sight but you are scrambling round trying to complete your objective or avoid falling foul of any terrors out to suck you stat points away.

Even though Helen and I were the only two players, the six levels of five rooms kept the game going for two hours in total. She got away. I died in the last location. Because of her as it ultimately turned out, yet we’d been working together perfectly well until the final location. Women! 😄

Even though this game differs to Oliver’s others, it isn’t a far flung effort being traditionally easy to pick up and more importantly, great great fun. This will be the third ten on ten Oliver McNeil game when I score it on BGG. Thanks for all the fun, laughs, and games you bring to the world Mr McNeil. Originally crowdfunded on Kickstarter, you can order a late backer copy if you CLICK HERE.

Hello fellow gamebookers. I know I promised an epic gamebook but between kids, decorating and other duties I have been pressed for time. BUT! Fear not good people, for to sate your appetite for Jamness, I have just published a little filler of a book with the most basic of mechanics. If you would like to read more CLICK HERE!!

Fellow Fighting Fantasy fans… Well if I haven’t gone and written my own gamebook! Ok, it isn’t big and it isn’t clever, but it should be great fun on a nostalgic level. Keep your eye open on Amazon from Monday 17th August.

A Box Of Horrors

From the rising popular games legend Oliver McNeil, creator of Weirding Woods and Dracodeep Dungeon comes a new avenue of tabletop Horror gaming. Will your stay in Hotel Lovecraft be long…. or will you get lucky? Watch the video and CLICK HERE to get it!!

Who remembers all those great classic TV programs of the 80s? The Box Of Delights? The Chronicles Of Narnia? Knightmare? The Adventure Game? These were shows that boosted the imaginations of an entire generation, and inspired many. One of those inspired was Mr Oliver McNeil, who has managed to carve himself a career out of said inspirations, creating games, and interactive theatrical performances. Now YOU can join in as he takes the show live online.

Oliver’s latest venture was a hybrid RPG boardgame named The Storymaster’s Tales – Weirding Woods and it’s already became something of a cult hit in the gaming community, with a second game Dracodeep Dungeon currently funding on Kickstarter. However, combining the elements of theatre, game, visual FX and internet you are all able to watch and take part in a LIVE interactive version on his Facebook page here https://www.facebook.com/groups/339654010167488/?ref=share

Hosted by Oliver himself alongside other actors and clever puppetry, he brings the Grimm Brothers-esque setting of Weirding Woods to life and you get to explore and take part in subplots as you strive to fulfill your primary mission be it slaying Evil Sorcerer’s or saving the world from a plague of living dead. With an ever expanding land, equipment, foes and treasure, this is a great way to spend time and liven up the pandemic lockdown. If you’d like to take part in one of the upcoming shows, click here and join the group for performance times https://www.facebook.com/groups/339654010167488/?ref=share

Regular visitors to my site especially gaming fans will have already seen my write up on The Storymaster’s Tales – Weirding Woods. A hybrid gamebook and tabletop RPG that has achieved wonderful success creates by my good friend Oliver McNeil. Well today it went triple hybrid, with the very first audio streaming experience over several live video platforms such as YouTube, Facebook and Hangouts.

With my trusty sidekick Colin Deady, aka Wizard Frin, my Pirate character Captain Jam tackled the as yet unreleased Dracodeep Dungeon, the follow up to the Weirding Woods game. Our quest was to slay an evil Vampire Lord that has woken beneath a not desecrated church above the Dungeon. But it wasn’t just about Colin and I communicating, others could also view our progress and call out tips to Ollys wizard presenter. It was a fantastic and modern experience, and the dungeon sported many new locations, items and characters to mingle with making a lovely alternative to the woodland romp. Somehow Colin managed to get a haircut and I purchased a goat that bit me on the arse. Dracodeep Dungeon will be a huge must for those that have played Weirding Woods, and a great standalone if you wish to give the world of RPG a try in a lighter way than D&D. I can only award it 10/10 for all the right reasons.

If you fancy giving this gaming great a go, please visit http://www.storymasterstales.com and for a mere £2.50 you can purchase audio files of the incidental music. This will enter you (but not guarantee you) in a pool for a place for the next game. It also helps if you like The Storymaster’s Tales Facebook page.

Check out Colin and mines progress as we spend two hours in a subterranean deathtrap. 😉 https://youtu.be/Yv-mH-Zzr90

So the fabulous Olly McNeil (pictured here with the equally fit and young virile one) has brought out his third tabletop game after an uber successful Kickstarter funding. The Storymasters Tales – Weirding Woods.

So how did the game bear up? Restricted by time due to two under 3y.o’s, we had to wait for an alloted window to turn up. Tonight we opened the box, familiarised with the rules and to keep it simple my Mrs, Victoria, played solo and I was storyteller. She created a character called Gladys who was a witch. I chose the Night Of The Dead storyline as I’m a Romero fan lol.

We soon picked up the gist of the game, it’s easiness being in not having too many stats to worry over. The cards for the game are beautifully illustrated and help conjure up an atmosphere. Each turn, Vic took a card and I read out the plot, at one point she was very happy to have purchased a dog from a trader. She then proceeded to choose one of four options and Gladys the Witch was swiftly torn to shreds by a dreaded Blood Wolf only a few turns in. (If only she had a squeaky tennis ball) 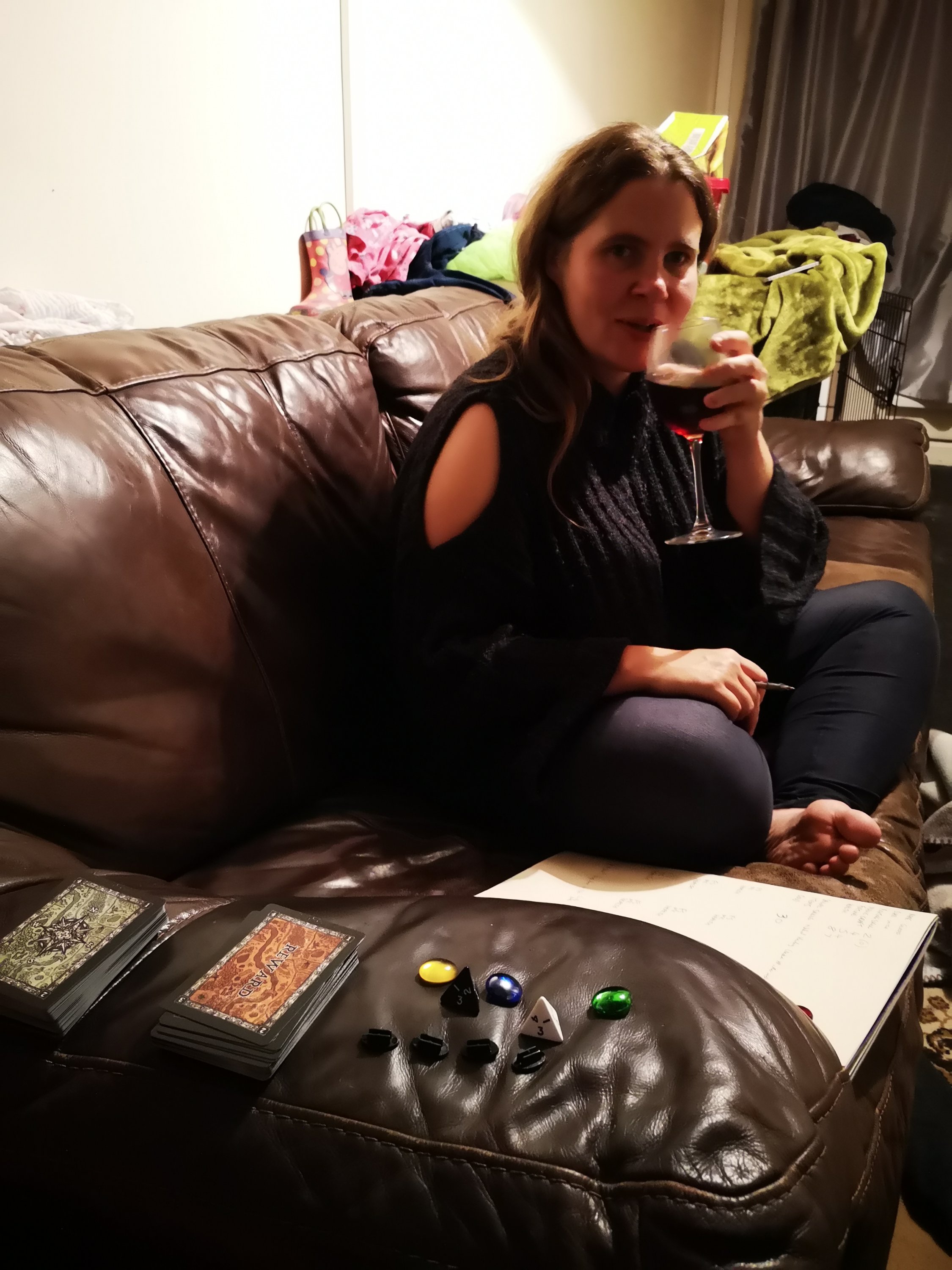 As a player of D&D back in the 80s, Vics only gripe with the game is there are only four options per plot. She wanted to stay their, craft arrows, set snares, etc so I had to say it wasn’t a saga of a game to that scale. Nonetheless she still loves it so we had another go. It was meant to be my go but as Vic was felled so soon I gave her another chance. Same quest, different character. This time, a Soldier called Bwian. She did much better this time but still fell foul of a monster. This time the Devil himself. (fancy fighting him… duh?).

All in all we have become rather attached to this game after only a couple of goes and will be swapping rolls tomorrow night so I get to play. Well recommended, easy to pick up, and beautifully presented. The only thing I’d say is add a wee slip case or rubber band for the card deck.

Go on, get yours here! 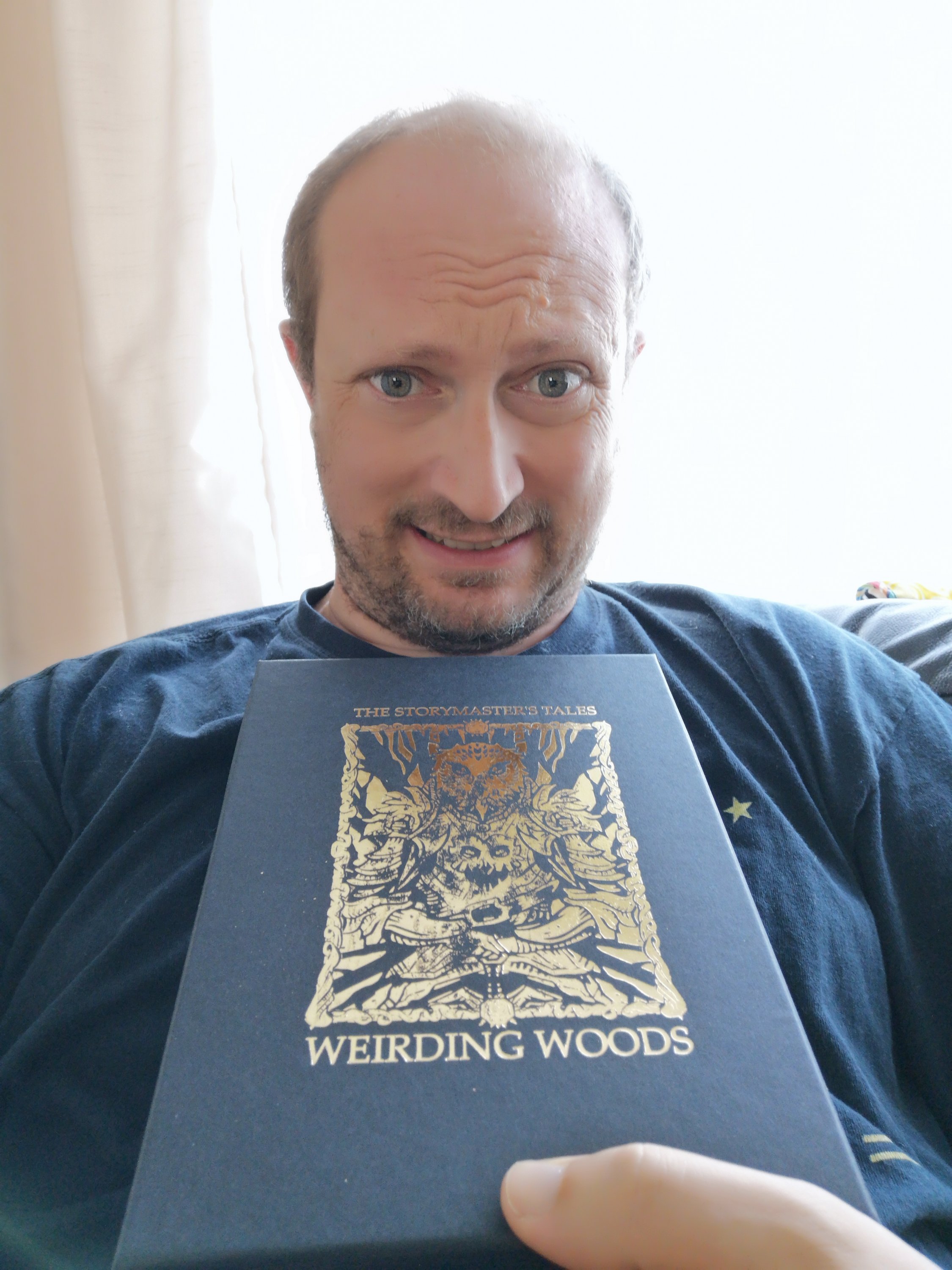 Seek and aquire a copy!