I am a big fan of the popular Gamebook series Fighting Fantasy, created by Games Workshop founders Steve Jackson and Ian Livingstone. They sold 17 million copies worldwide, have had numerous re-releases and several have been turned into computer games and more recently, apps thanks to Tin Man Games.

I discovered the books completely by chance at 11 years old. Some classmates were using the Sorcery! Spell book as a prop in the playground for whatever game they had made up and the cover, illustrated by Maggie Kneen caught my eye. After they had returned it to the school library I ordered it out myself. Once getting home I read through the pages of all the spells Steve Jackson had invented for this epic, but at this time I had know idea about those. Even going as far as putting a coin on my wrist and muttering the word WOK over and over thinking something may happen, and wondering what on earth the paragraph meant by STAMINA points.

Upon returning to school, somebody set me on the right track saying that the tome was an accompanying work for a series of orange spined books by the same Author. Thankfully I found Shamutanti Hills, 3 copies of The Seven Serpents and one Crown Of Kings. Sadly they never had Khare – Cityport Of Traps but I would buy all four a few years in the future. And so, my fanaticism with the series was born and the following Christmas my mother would buy my first regular game book of the series, Star Strider. I reminded her thereafter I wanted to collect from Book1 onwards, so The Warlock Of Firetop Mountain would be my 5th adventure.

The rest was history, with FF40 Dead Of Night becoming my personal favourite, and I would continue to collect the books until puffin ceased printing in the mid 1990s. Other favourites would include Ian’s Deathtrap Dungeon, Steve’s Creature Of Havoc and later writer and long term series fan, Jonathan Green’s Spellbreaker.
Times became financially difficult for me in my late 20s, and I had to sell some of the scarcer books of my near complete collection. Several years rolled by and other publishers would reignite the production of Fighting Fantasy Game books albeit in a different and revamped order. With the internet now a household thing and Facebook’s popularity, fans from all over the world would build websites, open groups and forums, which even the authors and illustrators of Fighting Fantasy would join and mingle with their legions of fans.

I am one third of trio of Gamebook fans/critics known as the Demonic Three. Here we are about to see Knightmare Live in 2016 alongside the Archmage himself, James Aukett (far left). 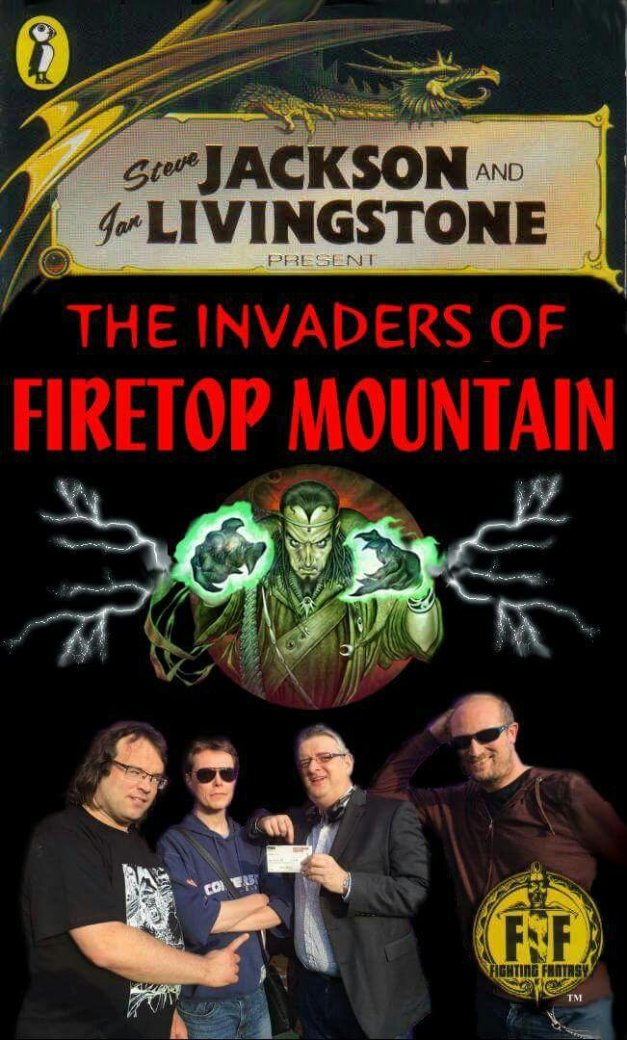 To download the pdf version of my own amateur Fighting Fantasy story, Lair Of The Lunatic CLICK HERE