So Scholastic have set the next six #FightingFantasy books into motion. Another five revivals and a brand new title, The Gates Of Death, should be joining us around April. Whilst not many of the die hard fans appreciated the cover art of the first six releases last year, at least they was all done by the same artist and looked generic. Unfortunately we are now met with a change in design. It’s not good.

Though one may argue the artwork is slightly more in line with the classic series (I said slightly) , it has been confined to a tiny circle in the middle of the page with about 80% the rest just a single colour broken by white lines. I’m pretty certain this is a money saving device. When you consider the full cover of art we had in the 80s – 00s this isn’t progress nor very eye catching. With the last six covers Scholastic gave the excuse they was using this type of art to appeal to an era of video gaming children. So why the change? I guess they’re admitting they was wrong and the fans we’re right and now going down the cheapest route tasting sour grapes. 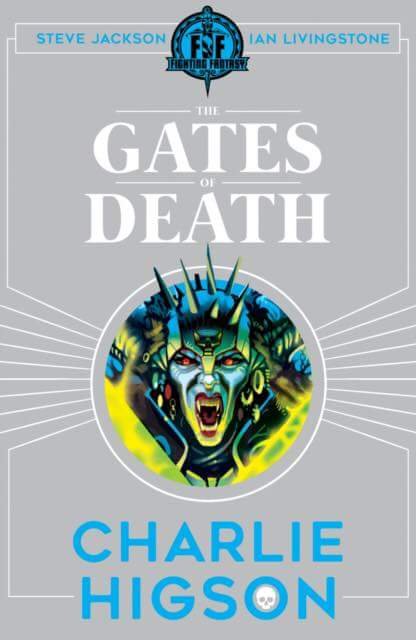 The Gates Of Death will be the first ‘presented’ written FF adventure since Jonathan Green’s wonderful Howl Of The Werewolf, and from the look of it Charlie Higson (of The Fast Show fame) will be the first non series creator to have his name boldly displayed on the front cover. Prestigious that may be, but is this a marketing twist to attract his own fans to buy this new quest? Either way, I am grateful for another new story and hope it goes down well with fans expectations and spurs Scholastic to employ other guest writers too such as the aforementioned Jonathan Green, Dave Morris, Jamie Thomson etc etc