So a couple of weeks ago I managed to get my hands on a copy of the tabletop game The Storymasters Tales – Weirding Woods and do a small review. Trying our best, Vic and I failed to complete our chosen quests on two occasions before giving a review. The past two nights however we have been fortunate to have our friends stay over. Where we failed, a young boy named Dakota not only managed to complete one game, but two in succession. Beast Slayer and Prophecy Of The Dragon. For a young boy who hasn’t had the best start in life this game not only entertained and excited him but winning filled him with a new found confidence and interest in other tabletop RPGs whereby he was largely only use to video games before.

Oliver McNeil who created the game has literally altered the life of a timid young boy , filling it with excitement and magical social interaction through this game. Incredibly weaved stories, subplots and interactivity ensures no two games are the same despite them maybe having similar occurences. Outcomes can differ through choice or roll of a 4 sided fate die. 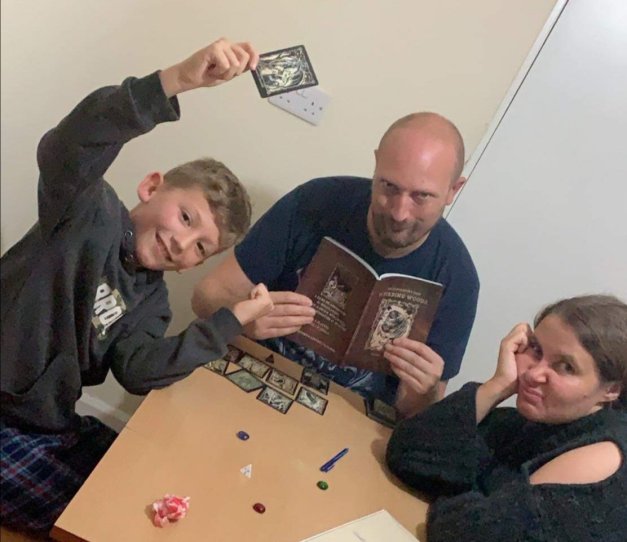 Do I still recommend this game? No doubt about it. I adored watching my Mrs get expelled from a library for farting, then poisoning a natural spring. The mechanics and ideas knit together so fluidly it makes you wonder how on Earth did Oliver think this up. Dakota’s mum said this must’ve been the working of a really intelligent man, and me having met him I assured her she was correct.

Vic, Armani and Dakota get whipped

Was it third time lucky for Dakota. Sadly not… ish. Vic was killed by a spider bite while trying a bit of grave robbing then the remaining two fell foul of a Fae Lord and attacked each other. Dakota won the fight but remained under the evil Lord’s control forever. It was like Anakin and Palpatine all over again. At least he lived on.

I can’t recommend this game enough and bequeath you the link once more.

BUY YOURSELF A COPY HERE.